I drew this version of the San Francisco flag during these Covidian times to remind my fellow citizens that our city’s motto describes our resilient past. With the help of the local homies at Anchor Brewing Company I made some posters of this image in support all of the boarded up bars and out of work bartenders across our city. There is scan code in the bottom right corner which directs you to donate to the USBG Bartenders Guild.

I made 1,000 screen prints of this image to be given away for people to display in their windows. My intention was to build unity and comradery with my fellow San Franciscans during this difficult time. I also made some 36″ versions of this image and with Anchor Brewing’s help, and permission from some of our city’s greatest drinking establishments, we pasted the image over the boarded up doors and windows of these closed bars. My intent was to show support to these bars and bartenders that we all love so much here in San Francisco. 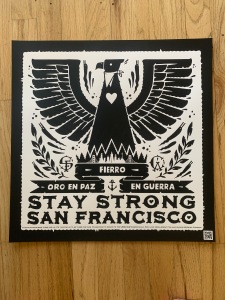 Jeremy Dan Fish was born in Albany, New York in 1974 and relocated to San Francisco in 1994. Finding a balance between exhibiting his work across the US, and internationally in galleries and museums. While producing commercial illustration projects for a wide range of corporate and independent clients all around the world. Fish was the first ever San Francisco Arts Commission artist in residency at SF City Hall in 2015 to celebrate the 100th birthday of the building. He was also the artist in residency at Coit Tower in San Francisco in the summer of 2017. Mr Fish created the Haight Street Bronze Bunny statue in 2016, and is the largest crowd funded public bronze statue in California. In 2015 Mayor Ed Lee officially declared that November 19th is "Jeremy Fish Day" in the city of San Francisco.
View all posts by Mr. Jeremy Fish →
This entry was posted in Uncategorized. Bookmark the permalink.